From Sun to Snow with a Love of Peanuts in Tow

Adriana Munch, the mastermind behind Green Mountain Peanut Butter is the definition of a driven, independent woman.  Wanting to improve her English proficiency, she packed up her bags and left sunny Costa Rica to arrive in snowy Vermont in the winter of 2013.  Splitting time between the sun and snow for the next 3 years, she fell in love with Vermont (especially its winters) and became a permanent resident in 2016. 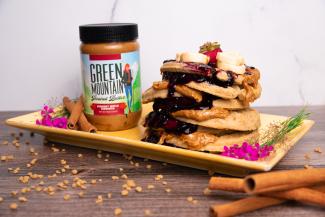 It was her father who first introduced Adriana to peanut butter. She has many memories of her father eating straight from the jars they would bring home from the store and it quickly became a favorite of the entire family. After much peanut butter consumption, her father stopped purchasing the stuff as he realized that what he was buying was filled with added sugars, oils, and preservatives and wasn’t exactly the healthiest of snacks. By this point, Adriana also had grown a love of the stuff and started exploring ways to create her own - without any of the additives.

After settling in Vermont full time, Adriana turned her focus to developing something that she could share with others.  Having been producing small-batch quantities of peanut butter for her family for years, Adriana decided to try scaling up her production. Peanut butter is relatively easy to make but good peanut butter takes more patience, you have to start with the right ingredients and in Adriana’s case this meant trying over 20 peanut varieties before settling on Runners & Virginia peanuts that have been dry roasted. Then “you have to make sure the peanuts get crushed and heated just enough to release the oils, then you can add your flavor components.”

Looking for a place to start mass producing ,  Adriana found the Vermont Food Venture Center online, only to discover that she had been playing in the same softball league with the facility manager, Connor for years. After connecting with Connor, Adriana underwent a 3-hour remote intake meeting during Covid before beginning production in March of 2021. Adriana remembers “it was a Thursday when I released my website… and I had a lot of mixed feelings including ‘what am I doing?’ But people started to buy. I was sitting in my room packing up orders thinking ‘I don’t know these people and they’re buying my peanut butter!’ It’s a dream come true.”

The first year of any business comes with a steep learning curve and Green Mountain Peanut Butter’s first year was no exception. Adriana set out with a plan to scale up quickly and release a new flavor of peanut butter each month. After a few days of production and trial and error, she settled on a production run of 200 jars per kitchen rental and 4 new flavor releases a year. The response to her product has been overwhelming - she even found herself sponsoring a Harpoon Brewery running race only 6 months after producing her first jar.  However, throughout this experience, she has felt so supported by CAE’s Business Services team in navigating the challenges of setting up a business” Everyone has been very supportive. At the beginning there was a lot of support and as time went on, they continued to be a resource. I cannot ask for a better place. They’re always there to help me.”

Her desire of “wanting to run a business, not have a business run me” has allowed her to fully enjoy the process of developing her brand.  She purposely focused on in-state sales only for her first year, and is excited about expanding into ME & NY in the coming year.  She also plans to hire her first employee this summer as production ramps up. Getting started, she told herself that “if after a year in business, we’re still in business, then it’s meant to be” so she’s taking it as a sign and forging ahead with plans of growing the business into something that hopefully, “is so big, it’s going to run without me.”

“There is real peanut butter out there. The focus is to provide the product you deserve.” Adriana is excited about the future of the business and is in the process of signing up for 1% for the planet. “So on top of eating delicious peanut butter you’ll get to support the planet as well!” A complete list of the flavors as well as where to find Green Mountain Peanut Butter can be found on the website.